What are the Rare Earth Metals?

It will come as no surprise that the unique properties (catalytic, chemical, electrical, metallurgical, nuclear, magnetic and optical) of the REM, and, in particular, both their specificity and versatility, have led to their being used for a wide variety of purposes.

From relative obscurity, they are now important economically, environmentally and technologically.

The range of applications in which they are used is extraordinarily wide, from the everyday (automotive catalysts and petroleum cracking catalysts, flints for lighters, pigments for glass and ceramics and compounds for polishing glass) to the highly specialized (miniature nuclear batteries, lasers repeaters, superconductors and miniature magnets).

Separately, or as compounds, various rare earth metals are used also in the production of superalloys.

USGS figures for 2006 indicate that the three main uses of REM in the U.S. were: automotive catalytic converters (25%), petroleum refining catalysts (22%) and metallurgical additives and alloys (20%).

In many of these applications, the REM are used in the form of low-cost compounds. As oxides, they are used extensively in the ceramics and glass industries and, in addition, for various metallurgical uses. Indeed, it has been estimated that only 25% of mined REM-bearing materials are actually processed to extract individual metals.

The REM most commonly used as separated metals are: cerium, europium, gadolinium, neodymium, samarium and terbium.

From having been a major producer (and consumer) of REM (from the Mountain Pass mine in the Mojave Desert, Calif.) until the mid-80s, the U.S. now no longer mines any REM. The world's major producer is China (particularly from its Bayan Obo mining operation in Inner Mongolia), with considerably lesser amounts coming from Brazil, India and Russia. Since 2000, domestic REM consumption in China (which now accounts for over half of the country's overall REM products) has exceeded that of the U.S.

While REM deposits in China and the U.S. are primarily to be found in the mineral bastnäsite (80-90% of all raw materials produced), elsewhere — and in particular in Australia, Brazil, India, Malaysia, South Africa, Sri Lanka and Thailand — they are usually to be found in the mineral monazite. (There are also monazite resources both in China and the U.S.) Mining monazite can, however, be a little tricky, as the ore tends to contain the radioactive elements thorium (see Cobalt: More Than Just Blue) and radium.

In addition, there are also REM-containing ion-absorption ores in the south of China. Importantly, these last contain around 80% of the world's known resources of the less-widespread heavy, yttrium group, metals. 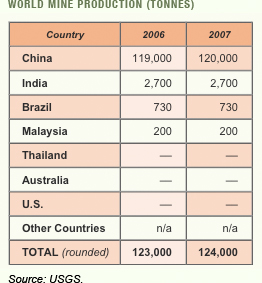 While not yet actually recommencing mining operations (for environmental, regulatory and market reasons), toward the end of 2007, Molycorp Inc. resumed operating its Rare Earth separation plant at Mountain Pass. The company continues to sell bastnäsite concentrates and REM intermediaries, together with refined products, from its existing mine stocks. Permits to recommence mining are still pending.

Domestic demand in the U.S., as well as the demand for REM globally, remained strong in 2007, and have continued so in 2008. This has been true both for mixed rare earth compounds and the metals and their alloys. According to the 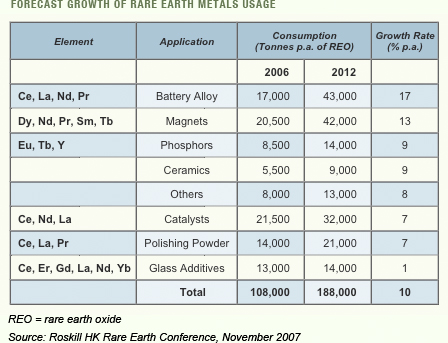 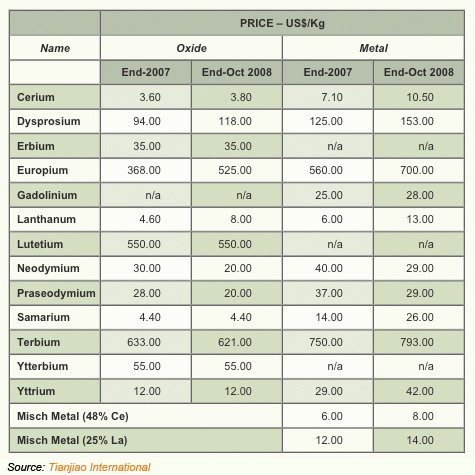 With such strong domestic demand for REM in China, there are now controls on production and exports (tariffs and quotas). And in some places, because of environmental concerns, among other things, there are both mining restrictions and mining quotas.

According to Roskill's 2007 report on the economics of rare earths and yttrium, this has "brought fundamental change to the global industry, taking it from oversupply to demand shortages."

Indeed, in its report, Roskill envisaged that, with demand growth for rare earths forecast at 8-11% per annum, and should China's strict control persist, there will be a significant need for "new non-Chinese capacity in the next 3 to 4 years."

First, it has been estimated that current global consumption of REM now accounts for around 70-75% of their total production. This leads one to believe that considerable quantities of mined REO remain, as yet to be processed.

Second, the mineral ore resources currently mined to produce REM contain different groups of metals, not just particular, individual, metals in isolation. So, instead of some of these metals being by-products of other metals, as, say, rhenium is of moly, and moly is of copper, they are essentially "co-products" — mine for one and the others come free.

The corollary to this, however, is that the economics of mining on such a "volume" basis could lead to it just not being viable to mine such ore resources for one or two REM alone, especially if the other metals contained in the REO do not "pay their way." In future, therefore, the composition of a mine's REO resources — as opposed just to the volume of ore it can produce — may well become critical to that mine's economic viability.